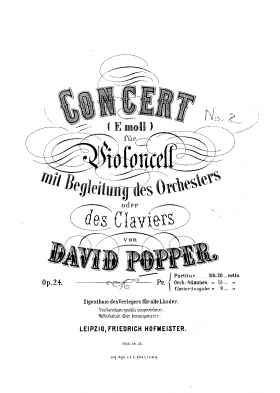 This cello concerto is one of Popper's earliest works. Despite its later opus number, it was premiered on 9 November 1862. The work was reviewed by several newspapers, including the Dresdener-Zeitung and Musik-Zeitung of Berlin, as quoted in the Menter-Popper biography from 1876. Popper revised this concerto in 1879, which he performed with the Gewandhaus Orchestra in Leipzig on 23 October 1879. The published version appeared in June 1880 both for orchestra and for piano accompaniment.

The first movement is in sonata form, beginning with an orchestral introduction, a partial exposition. The first solo section is quite lyrical, showing Popper's melodic inventiveness. After the second tutti section, the cello comes in with an improvisatory second theme, operatic in nature. Popper does not recapitulate the first theme but goes directly to the second theme in the tonic key. The slow movement is the gem of this concerto. It is in A-flat major in three-part form. It is a direct relative of the Andacht movement from Im Walde, Op. 50. The finale is also in sonata form without the first-theme return. It has thematic similarities with the first movement. The opening motive closely resembles Grützmacher's Third Cello Concerto finale, which was composed just a few years prior to Popper's