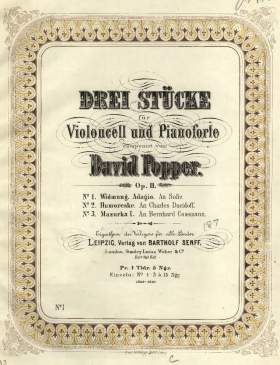 Popper was already playing the Mazurka in March 1868. It is unclear when the other two works were composed; however, it is not out of the question that all three of the pieces were composed around the same time.

Widmung was published with a dedication to Sophie Menter, Popper's wife at the time of publication. This work pays tribute to Schumann in title and gesture, as Schumann's Widmung was for Clara. The lengthy Adagio is in two parts. The first part is in 2/4 time and is in the style of Schumann's songs. The second part is in 4/4 time and has more tempo fluctuations. It is more reminiscent of Wagner's Tristan. Near the end, there are a couple of bars that are very similar to Schumann's Cello Concerto, the bridge between the first and second movement.

The Mazurka is the most innovative of the three pieces. This dance is earthy, written in the style we have come to associate with Grieg. Popper and Grieg were born just a couple of days apart. We can almost consider them musical twins.

Widmung orchestration by Paul Gilson was published by Senff in 1901. The score and parts are located at the Free Library of Philadelphia.